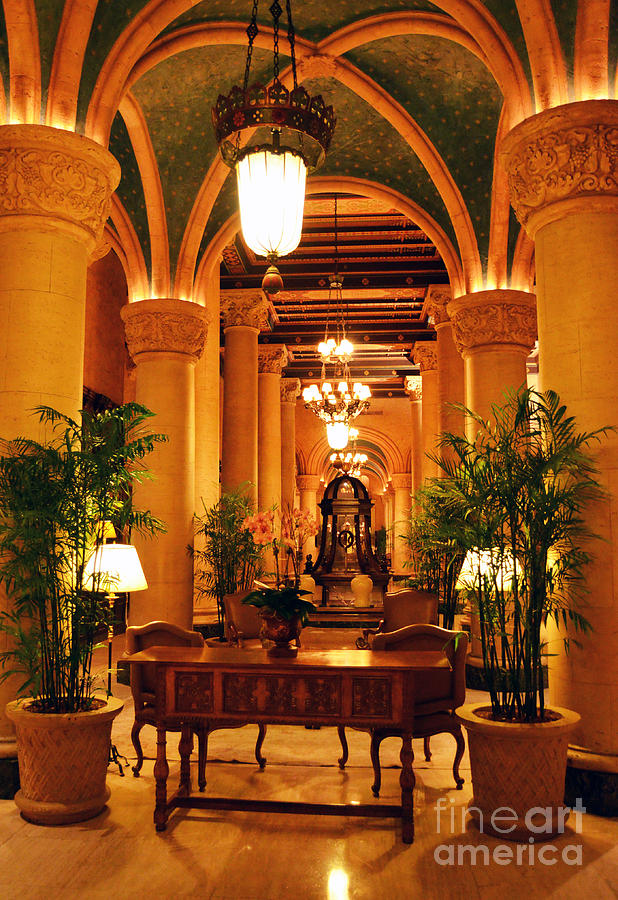 View of the subtly lit classic vintage 1920s lobby at the Biltmore hotel in Coral Gables, south Florida, just outside of Miami. More images from the Biltmore can be found in my South Florida gallery.

The Coral Gables Biltmore Hotel is a luxury hotel in Coral Gables, Florida, United States. It was designed by Schultze and Weaver and was built in 1926 by John McEntee Bowman and George Merrick as part of the Biltmore hotel chain.

The Miami-Biltmore Hotel & Country Club was designated a National Historic Landmark in 1996. On April 18, 2012, the AIA's Florida Chapter placed the building on its list of Florida Architecture: 100 Years. 100 Places as the Biltmore Hotel.

It served as a hospital during World War II and as a VA Hospital and campus of the University of Miami medical school until 1968. It became a hotel again in 1987 managed by the Seaway Hotels Corporation.

Some superstitious people claim this hotel to be haunted, most often by the spirit of Thomas Walsh.

At one time the pool was the largest pool in the world and among the many attractions was swimming instructor (and later Tarzan actor) Johnny Weissmuller.

and again, many thanks to the latest buyer from Coral Springs, FL!

Thanks all!...and thanks much to the latest buyer from St Louis, MO!

Great capture of this beautiful interior!